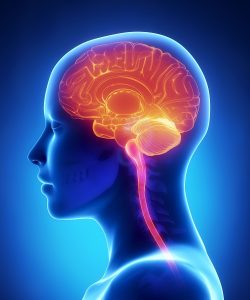 Neurovascular surgery involves the treatment of abnormalities of blood vessels of the brain and spinal cord. Some examples are brain aneurysms, arteriovenous malformations and  arteriovenous fistulas. These conditions are treated by neurosurgeons and interventional neuroradiologists.   These cerebrovascular conditions may be  managed  with conventional open surgery or endovascular treatment. 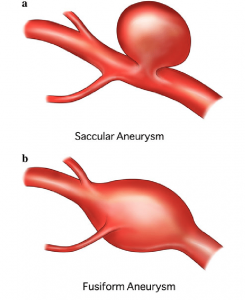 An aneurysm is a bulge in a weak area of the wall of a brain artery. It puffs out like a small balloon. It is also called an intracranial aneurysm or brain aneurysm. The bulge is also known as a bleb. It makes the artery more likely to tear (rupture) in that spot. They more often occur in an artery under the front part of the brain. But arteries anywhere in the brain can get an aneurysm.

A normal artery wall is made up of 3 layers. The wall where the aneurysm forms is thin and weak. The weak area is caused by too little muscle in the artery wall. There are several types of brain aneurysms. They are saccular, fusiform, and dissecting aneurysm (Figure 1).

Most cerebral aneurysms do not cause symptoms, except when they burst and bleed. Smaller aneurysms may be less likely to break.

The main goal of treatment is to decrease the risk of bleeding in the brain.

Many factors are considered when making treatment choices. These include:

There are 2 main types of surgery for a cerebral aneurysm. They are:

Open craniotomy (surgical clipping). This procedure is performed by removing part of the skull to reach the aneurysm. The surgeon places a metal clip across the neck of the aneurysm. This is done to prevent blood flow into the aneurysm bulge. Once the clipping is done, the skull is closed back together.

Endovascular coiling. This is also called coil embolization (Figure 2). It is a minimally invasive method. It is the most common method used to treat cerebral aneurysms. An incision in the skull is not needed. Instead, a catheter is pushed up from a blood vessel in the groin into the blood vessels in the brain. Fluoroscopy (live X-ray) is used to help move the catheter into the head and into the aneurysm. Once the catheter is in place, tiny platinum coils are put through the catheter into the aneurysm. These soft coils are visible on an X-ray. They conform to the shape of the aneurysm. The coiled aneurysm becomes clotted off (embolization). This prevents rupture. This procedure is done with general anesthesia, sedation, or local anesthesia. 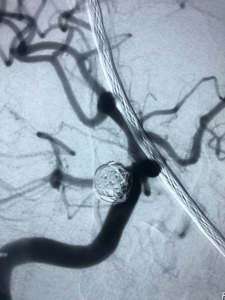 An AVM can occur anywhere in the body, but brain and spinal AVMs present substantial risks when they bleed. Because the brain and its blood vessels are formed together during embryological development, abnormal blood-vessel formation is often associated with abnormal brain tissue. Little is known about the etiology of brain AVMs. The cause of brain AVMs is debated and many believe that they are congenital.

Approximately 50% of patients initially present with a bleed; often patients with an AVM experience no symptoms and their AVMs are discovered only incidentally, usually either during an autopsy or during treatment for an unrelated disorder. The proportion of patients diagnosed with unruptured AVMs has almost doubled in the past three decades with improved non-invasive imaging. About 12% of people with AVMs experience symptoms varying in severity. AVMs can irritate the surrounding brain tissue and cause seizures or headaches

The goal of brain AVM treatment is typically the prevention of hemorrhage from rupture. However, seizure control or stabilization of progressive neurological deficits are occasionally treatment goals. Interventional treatment of ruptured brain AVMs is generally advisable, considering a higher subsequent hemorrhage risk.

The management options for brain AVMs (ruptured or un-ruptured) include observation or various treatment techniques, such as microsurgical techniques, endovascular embolization and stereotactic radiotherapy used alone or in combination with varying degrees of treatment-associated morbidity and mortality. A treatment plan is devised to offer the lowest risk, yet the highest chance of obliterating the lesion. 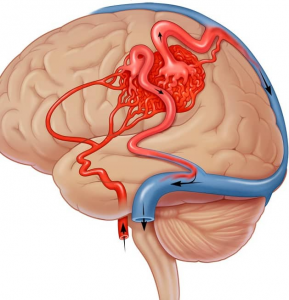 Like the arteries to the heart, the vessels that supply blood to the brain may become narrowed due to hardening of the arteries, or atherosclerosis. When blood flow to any part of the brain decreases, a stroke may occur. 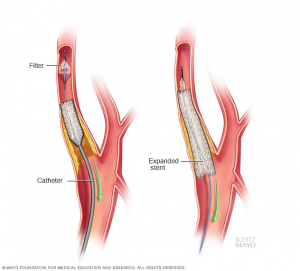