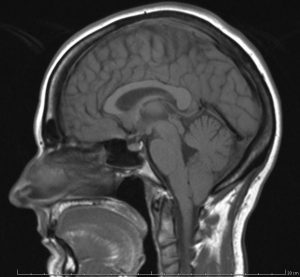 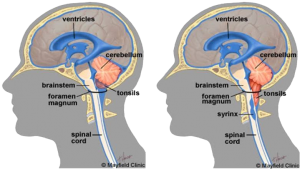 Chiari malformation (CM) is an anomaly in which the lower part of the brain called the cerebellum extends into the spinal canal. Normally, the cerebellar tonsils are located just above the foramen magnum. However, in individuals with Chiari, the tonsils hang below the foramen magnum and herniate into the spinal canal (Figure 1). The degree to which the tonsils extend can vary tremendously.

Treatment of Chiari malformation depends on the form, severity and associated symptoms. Regular monitoring, medications, and surgery are treatment options. In some cases, no treatment is needed.

Many people with Chiari malformation have no signs or symptoms and do not need treatment. Their condition is detected only when tests are performed for unrelated disorders.   Others may have symptoms such as:

In some patients, Chiari malformation is associated with other neurological disorders including

Fig 2 MRI displaying a healthy patient left and another with Chiari malformation. Note the descend of cerebellar tonsils into the spinal canal.

To diagnose your condition, your doctor will review your medical history and symptoms and conduct a physical examination.

Your doctor may order imaging tests to determine the cause of your condition and diagnose your disease. The best test to evaluate patients with Chiari malformations is the MRI.

An MRI can be repeated over time, and it can be used to monitor the progression of the disorder.

Treatment for Chiari malformation depends on the severity and the characteristics of the condition. If you have no symptoms, your doctor likely will recommend no treatment other than monitoring with regular examinations and MRIs. If symptoms are mild and not progressing, your doctor may recommend conservative management. Supportive care such as a headache and pain management, physical therapy or a reduction in activities can help manage symptoms.

When symptoms do not improve, surgery may be considered as an option.

In the most common surgery for Chiari malformation, called posterior fossa decompression, your surgeon removes a small section of bone in the back of your skull, relieving pressure by giving your brain more room (Figure 3). In some cases, the surgeon may also remove a small portion of the spinal column to relieve pressure on your spinal cord and allow more space for the spinal cord. The specific surgical techniques will vary among surgeons; no consensus yet exists on the best variation on this surgical procedure.