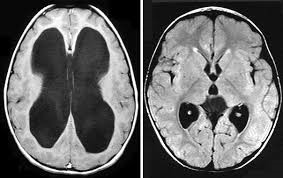 Hydrocephalus may occur at any age, but it is more frequently observed among infants and adults over 60.

A very special type of hydrocephalus called normal pressure hydrocephalus may occur in old people, the characteristics and causes of this condition will be described below.

Different therapies are required to manage symptoms resulting from hydrocephalus.

Hydrocephalus may result from inherited anomalies or developmental disorders, which block the normal flow of  CSF. Hydrocephalus can develop as part of another condition.

These are the more common causes of hydrocephalus:

NPH can occur secondary to head trauma, stroke, infections, or brain tumors. In most cases of NPH, the cause is unknown.

The functions of the brain most often affected in NPH are those that control the legs, the bladder, and the “cognitive” mental processes such as memory, reasoning, problem-solving, and speaking. This decline in mental processes is known as dementia. Other symptoms include abnormal gait (difficulty walking), inability to hold urine (urinary incontinence), and, occasionally, inability to control the bowels.

The dementia symptoms of NPH can be the same as those of Alzheimer’s disease. The walking problems are similar to those of Parkinson’s disease. For this reason,  many cases of NPH are misdiagnosed as one of these diseases. 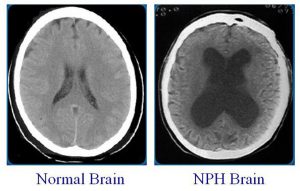 The combination of dementia-like symptoms, walking problems, and urinary problems should alert to the possibility of NPH

Brain imaging tests (CT scan, MRI) will show the enlargement of the ventricles in cases of NPH (Figure 1).

Very often, complementary tests are needed to confirm the diagnosis of NPH. The most common test is a lumbar puncture (spinal tap). This procedure involves the removal of CSF from the lower back. When the patient shows improvement after the spinal tap, this indicates that a surgical shunt to drain CSF would be helpful in that person. 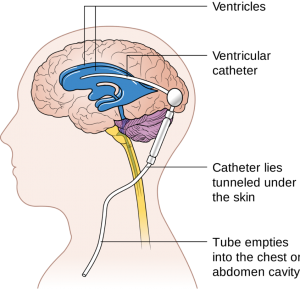 Hydrocephalus is most often treated by surgically inserting a shunt system. This system diverts the flow of CSF from the CNS to another area of the body where it can be absorbed as part of the normal circulatory process.

Shunt systems are imperfect devices. Complications may include mechanical failure, infections, obstructions, and the need to lengthen or replace the catheter. Generally, shunt systems require monitoring, and regular medical follow up. When complications occur, subsequent surgery to replace the failed part or the entire shunt system may be needed.