Trigeminal neuralgia is an uncommon neurological condition that causes sudden, severe, brief, stabbing recurrent episodes of facial pain in one or more branches of the trigeminal nerve. It is usually caused when an artery or a vein are compressing the trigeminal nerve, but can also be present with no apparent cause. It is sometimes misdiagnosed as a dental or jaw problem or as a psychological disorder. Once correctly diagnosed, there are several medical and surgical treatment options to reduce or relieve the debilitating pain caused by this disease.

The first line of treatment for patients with trigeminal neuralgia is always medication. Even minimally invasive surgery carries risks and should be considered a last resort.

TN can be caused by a blood vessel pressing on the trigeminal nerve as it exits the brain stem. This compression causes damage to the protective coating around the nerve (the myelin sheath). TN symptoms can also occur in people with multiple sclerosis, a disease that causes deterioration of the trigeminal nerve’s myelin sheath. Rarely, symptoms of TN may be caused by nerve compression from a tumor, or a tangle of arteries and veins called an arteriovenous malformation. Injury to the trigeminal nerve (perhaps the result of sinus surgery, oral surgery, stroke, or facial trauma) may also produce neuropathic facial pain.

In cases of TN, the pain is most commonly felt on one side of the face (unilateral) and usually in the cheek or lower jaw. The pain can be described as stabbing, shooting, burning, excruciating, and unlike any other pain previously experienced. The pain attacks may last for a few seconds or occur in multiple bursts of pain in quick succession. The pain, often triggered by just a light touch to an area of skin, can strike at any time and without warning. The frequency of attacks can vary from a few times a month to several times each day depending on the severity of the condition. There may also be pain inside the mouth, and often it can feel as if it is coming from one or more teeth, hence many people seek the help of their dentist initially, and some may undergo unnecessary dental treatment before getting a correct diagnosis. Very commonly, TN has identifiable triggers which can provoke pin attacks. These triggers include: brushing teeth, yawning, swallowing, face washing, shaving or putting on make-up, vibration or sudden movement, exposure to cold or breeze on the face, a light touch to the affected area, eating or biting into something and talking or smiling.

TN diagnosis is based primarily on the person’s history and description of symptoms, along with results from physical and neurological examinations. Other disorders that cause facial pain should be ruled out before TN is diagnosed. Most people with TN eventually will undergo a magnetic resonance imaging (MRI) scan to rule out a tumor or multiple sclerosis as the cause of their pain. This scan may or may not clearly show a blood vessel compressing the nerve. Special MRI imaging procedures can reveal the presence and severity of compression of the nerve by a blood vessel. 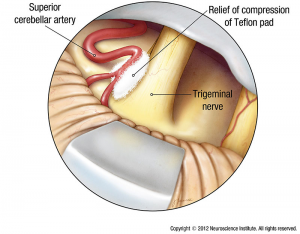 Initial therapy of TN is based on the use of medications including carbamazepine, oxcarbazepine, topiramate, gabapentin, pregabalin, and others. Common analgesics and opioids are not usually helpful in treating the sharp, recurring pain caused by TN. If your pain persists after a few months on the medication, or if the side effects are so serious that your quality of life has become significantly impaired, a surgical procedure may be an option for you.

Surgery can broadly be split into two categories: non-invasive and invasive. Non-invasive surgeries include injections through the cheek (commonly known as percutaneous procedures) and Stereotactic Radiosurgery (Gamma Knife) which does not involve an incision but is a dose of radiation. Invasive surgery is Microvascular Decompression (MVD) which consists in opening the skull and lifting the offending blood vessel away from the nerve.

During microvascular decompression, your doctor makes an incision behind the ear on the side of your pain. Then, through a small hole in your skull, your surgeon moves any arteries that are in contact with the trigeminal nerve away from the nerve and places a pad between the nerve and the arteries (Figure 1). If a vein is compressing the nerve, your surgeon may remove it.

Microvascular decompression achieves the most sustained pain relief with 90% of patients reporting initial pain relief and over 80% still pain-free after 1 year, with 75% after 3 years and 73% after 5 years remaining pain-free. It is, however, a major surgical procedure that entails craniotomy to reach the trigeminal nerve in the posterior fossa