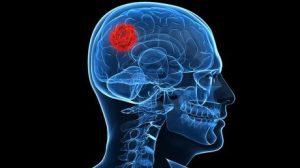 There are many different types of brain tumors. Some of them are benign, and some are malignant. Brain tumors start growing in the brain (primary brain tumors); or the tumor may begin in other parts of the body and spread to the brain, these are called secondary tumors or metastatic. The speed of tumor growth may vary considerably. The location of a brain tumor and the growth rate determines how it will affect brain functions.

Primary brain tumors originate in the brain itself or tissues close to it, such as in the meninges, cranial nerves, pituitary gland or pineal gland.

Any cancer can spread to the brain, but common types include:

The signs and symptoms of a brain tumor vary greatly and depend on the brain tumor’s size, location, and rate of growth.

Signs and symptoms caused by brain tumors may include:

A neurological exam may include, among other things, checking your vision, hearing, balance, coordination, strength, and reflexes. Difficulty in one or more areas may provide clues about the part of your brain that could be affected by a brain tumor.

Imaging tests. Magnetic resonance imaging (MRI) is commonly used to help diagnose brain tumors. In some cases, a dye may be injected through a vein in your arm during your MRI study (Figure 1). 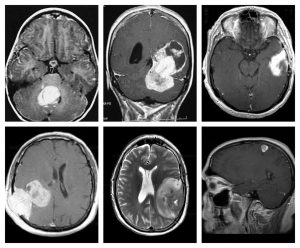 Treatment for a brain tumor depends on the type, size, and location of the tumor, as well as your overall health and your preferences. Very often, the treatment of brain tumors is multidisciplinary involving different medical specialties.

If the brain tumor is located in a place that makes it accessible for an operation, the neurosurgeon will work to remove as much of the brain tumor as possible.
In some cases, tumors are easy to separate from surrounding brain tissue, which makes complete surgical removal possible. In other cases, tumors can’t be separated from surrounding tissue or they’re located near sensitive areas in your brain, making surgery risky. In these situations, your surgeon removes as much of the tumor as is safe.
Even removing a portion of the brain tumor may help reduce your signs and symptoms.
Surgery to remove a brain tumor carries risks. Some risks may depend on the part of your brain where the tumor is located. For instance, surgery on a tumor near nerves that connect to your eyes may carry a risk of vision loss.

Awake brain surgery is also called awake craniotomy, a type of procedure performed on the brain while you are awake. Awake brain surgery is used to treat some brain tumors. If the tumor is near the parts of your brain that control vision, movement or speech, you may need to be awake during surgery. The surgeon may ask you questions and monitor the activity in your brain as you respond. Your responses help your surgeon to ensure that he treats the correct area of your brain needing surgery. The procedure also lowers the risk of damage to functional areas of your brain that could affect your vision, movement or speech.

Radiation therapy uses high-energy rays to kill cancer cells and abnormal brain cells and to shrink tumors. Radiation therapy may be an option if the tumor cannot be treated effectively through surgery.
Radiation can focus just on the area of your brain where the tumor is located, or it can be applied to your entire brain (whole-brain radiation). Whole-brain radiation is most often used to treat cancer that spreads to the brain from some other part of the body and forms multiple tumors in the brain.

Stereotactic radiosurgery is not a form of surgery in the traditional sense. Instead, radiosurgery uses multiple beams of radiation to give a highly focused form of radiation treatment to kill the tumor cells in a very small area. Each beam of radiation isn’t particularly powerful, but the point where all the beams meet — at the brain tumor — receives a very large dose of radiation for killing the tumor cells.
There are different types of technology used in radiosurgery to deliver radiation to treat brain tumors, such as a Gamma Knife or linear accelerator.
Radiosurgery is typically done in one treatment, and in most cases, you can go home the same day.
Gamma knife is a type of radiosurgery specially designed to be used in the brain. It can be used to treat targets even in the most critical, difficult-to-access areas of the brain without delivering significant radiation doses to healthy normal brain tissue. Gamma Knife is more precise and delivers less dose to normal tissue than other radiosurgical tools that are currently available (Figure  2). 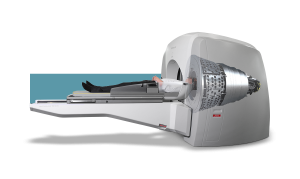